Hue was the capital of Vietnam for more than a century as the result it has become a center of architectural works with its own characteristics of a past historical era. One of them is the Thien Mu pagoda a distinctive and unique architectural structure and historical site of Hue.

1. Where Is Thien Mu Pagoda

Thien Mu Pagoda or namely Pagoda of the  Heaven Fairy Lady is also known as Linh Mu Pagoda. It is placed on Ha Khe hill, on the north bank of the Perfume River (Huong River) in Huong Long village, 5 kilometers from Hue city, which is easy to reach from the city center. With 400 years of the historical timeline, it is one of the most fascinating and ancient pagodas in Hue city as well as its best incredible landscape.

As legend has said that in 1601 when Lord Nguyen Hoang, traveling for pleasure here and there, found a hillock-like dragon’s head turning toward the mother mountain with adjoins the water of an interminable river. Being pleased with the excellent landscape here, The Lord climbed upon the high hill to admire the surrounding scenery. After asking local habitants, he learned that this hillock was very sacred.

Besides, the name of the pagoda derives from a special legend. A long time ago, one night,  an old lady in a red coat appeared on the hill where the pagoda stands today, telling him that in the future there would be a true Lord who came to build a Buddhist pagoda for the country’s prosperity. Lord Nguyen Hoang, therefore, ordered the construction of the pagoda the “Heaven Fairy Lady” or Thiên Mụ in Vietnamese (also called Linh Mụ).

Thanks to such a mysterious history, the pagoda has attracted a great number of tourists from both inside and outside of the nation to come and explore the legend themselves.

3. What To See In Thien Mu Pagoda

After being built in 1601 in a very simple form of construction, several kings of the Nguyen Dynasty such as Gia Long, Minh Mang, Thieu Tri, and Thanh Thai, all had the pagoda restored. Moreover, Thien Mu pagoda still has been splendid up to now thanks to the restoration and renovation of the Buddhist head monk Thich Don Hau.

In terms of the architectural work of the pagoda, Phuoc Duyen tower, formerly known as Tu Nhan tower,  is the pagoda’s most outstanding feature, which is built as a seven-floor octagonal tower 21.24 meters high in the middle of the 19th century under the reign of King Thieu Tri and outside Nghi Mon gate.

Each floor worships one Nhu Lai Buddha,  inside there is a spiral staircase leading to the top and the highest floor worships Duc The Ton Buddha. At that time, Buddha statues were cast in gold but later, there were replaced with copper status.

An enormous bell, called Dai Hong Chung is protected by a hexagonal house that is located to the left of the tower. In April 1710, Lord Nguyen Phuc Chu cast a great size bell that is 1.4 meters in diameter and 2.5 meters high, and 3.285 kg in weight, which is not only the famous bell in Hue but also a precious aesthetic work. This exotic bell has shown the delicate art of Vietnam bronze casting in the 18th century.

To the right of the tower is a pavilion containing a stela dated from 1715. It is set on the back of a massive marble turtle, a symbol of longevity, and is 2.58 m high.

In front of Tam Quan gate, there is a stele of King Khai Dinh. The main gate is called Trung Quan, the left is Khong Quan, and the right is Gia Quan. The entrance has statues of Dharma protectors. Above the gate is an empty floor and a bell floor.

Passing through the Tam Quan gate, you will get to the Dai Hung shrine. Inside this temple is a statue of Buddha with other impressive sculptures. It is also the place to display the giant bell with a height of 2.5 meters and a weight of more than 2 tons.

A building near the rear of the complex houses a national relic: the car which carried the monk Thich Quang Duc to the intersection of Phan Dinh Phung and Le Van Duyet streets in Saigon on June 11th, 1963, where Quang Duc’s self-immolation was done to protest alleged persecution of Buddhists of the policy of Saigon’s regime at that time.

The surrounding pine forest and peaceful scene of the Perfume river give the pagoda a serene beauty that is hard to find anywhere.

Visiting Thien Mu Hue pagoda, besides the unique architecture of Hue temple, you can also admire the scenery from Ha Khe Hill. The visitors are also deeply touched by its beautiful nature and ancient architectural building with its impressive tower reflecting itself on the surface of the graceful Perfume river.

Apart from architectural values, Thien Mu pagoda makes a great contribution to becoming a center of anti-government protest during the summer of 1963.  With discontent during the Buddhist crisis when President Ngo Dinh Diem had shown discrimination against Buddhists, a load of protests explored, resulting in nine Buddhists have died at the hand of Diem’s army and police on Vesak, the birthday of Gautama Buddha. In those historical days, Thien Mu Pagoda was a major organizing point for the Buddhist movement and was often the location of hunger strikes, barricades, and protests.

5. How To Get To Thien Mu Pagoda

Thien Mu pagoda is only 5km to the West of Hue, so you can get here by motorbike, bike, as well as boat. A bike trip is highly recommended since the road is very scenic and it takes approximately 10 minutes to get here. A perfect ride should be in the early morning or late afternoon to avoid the heat of the summer of Hue.

Hue has been called ‘the capital of Buddism’. For hundreds of years, each structure of the pagoda has expressed the belief, that the solemn and harmonious combination with beautiful natural landscapes. Therefore, the Thien Mu pagoda is a famous place that visitors can’t miss when visiting the ancient capital of Viet Nam.

If you would like to visit this beautiful pagoda in Hue, please do not hesitate to book the Hue City Tour with I Love Hue Tour or participate the Hue Tomb Tour with VM Travel 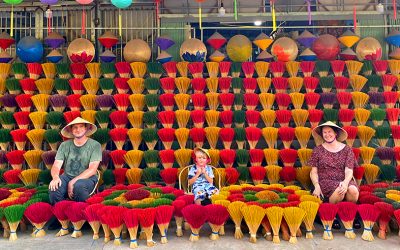 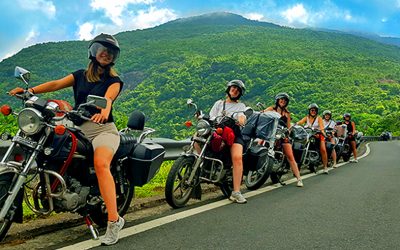 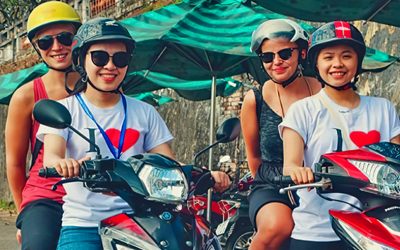 Hue City Tour By Motorbike is highly recommended if you want to explore Hue in the best way. The local guides will...