Tu Hieu Pagoda – A Majestic Pagoda In Hue Must Visit

Being well-known as one of the most famous ancient pagodas, Tu Hieu pagoda Hue is imbrued with the old architecture of the Hue imperial citadel. Besides sacred religious work, the pagoda is also a famous sightseeing with historical and cultural value. There are some highlight things about this pagoda including location, history, architecture and zen master Thich Nhat Hanh.

The pagoda of Tu Hieu is located in Duong Xuan Thuong III village, Thuy Xuan ward, Hue city. Tu Hieu pagoda is surrounded by a green pine forest. Thanks to this wonderful location, this beautiful pagoda has been catching the attractions of both domestic and foreign visitors. The location of Tu Hieu temple is in proximity to many famous tourist places for visiting in Hue City as Vong Canh hill (2.7km), King Thieu Tri tomb (1.8 km), King Tu Duc tomb (1.6km), Nam Giao altar (1.9km). Travellers could visit these attractive places after visiting Tu Hieu pagoda, if tourists have lots of time.

The pagoda was named by King Tu Duc, after he heard the story of monk Nhat Dinh who is founder of Tu Hieu Pagoda. In 1843, after resigning “Tang Cang Giac Hoang Quoc Tu” and hanging out power of Bao Quoc pagoda for monk Nhat Niem, monk Nhat Dinh came here to start to erect “Thao Am An Duong” in order to meditate and looking after his old mother. Monk Nhat Dinh is famous for being a filial son. It is said that when his mother was seriously ill, every day he took care of his mother with medicine, but she still did not get well. Some people recommended that he should buy more fish & meat to nourish his mother, so that she could get back to normal soon. After hearing, the monk Nhat Dinh still walked on the forest with a walking stick down to the market more than 5 km away to buy fish to bring home to cook for his mother. People saw that and they started having bad gossips about the monk. But he ignored his ear to take care of his mother. The story was reached Emperor Tu Duc’s ears, Tu Duc King was a very filial son to his mother. The king was very impressed by the heart of Nhat Dinh monk and gave the name “Sac Tu Hieu Tu”. The pagoda has been named Tu Hieu since then.

3. Architecture of Pagoda and special cenmeteries of eunuchs under the Nguyen Dynasty

Not only associated with the heartwarming religious story but also Tu Hieu Pagoda is highlighted by the harmonious combination of architecture and poetic natural scenery.

First of all, in front of the temple gate, there is a 3-storey high tower built in 1896 used as a place to store statues according to the king’s edict. The gate of the pagoda was built in the form of an arched, two-storey covered roof and right in front of the paved road to enter the main hall is a half-moon lake planted with lotus and ornamental fish (catfish). The structure of the pagoda is in the form of a three-winged two-roofed temple, first is the main hall of worshiping Buddha, then Quang Hieu Duong.

Last but not at least, Tu Hieu pagoda with cemeteries of eunuchs is a special things, which have made it become difference from others pagoda. In the past, after monk Nhat Dinh passed away. Thao Am Duong was repaired and expanded become Tu Hieu Pagoda with the help of a eunuch whose name is Chau Phuoc Nang. He realized the fate of eunuchs like himself when he was old and passed away without relatives and helplessness. Tu Hieu pagoda would be a place for them to worship, therefore he advised other eunuchs in the court to donate so as to expand pagoda to have a resting place later. Because of the contribution to building the temple, after the death, the eunuchs were buried in a small hill next to Tu Hieu Pagoda. That was the reason which made pagoda be also known as the eunuch pagoda. Today, this graveyard is on the right of the pagoda with an area of nearly 1000m2. More than 24 graves are divided into three rows, arranged from low to high according to the position of the former eunuch.

Thich Nhat Hanh is a Vietnamese monk with global influence, considered one of the most influential Buddhist leader. For many decades of traveling and religious practice abroad throughout North America and Europe, he was the pioneer in spreading Buddhism to the West. When he was a poet and a peace activist, in 1967, he was honorably nominated by Martin Luther King, Jr. for the Nobel Peace Prize.

In addition, Thich Nhat Hanh is the author of more than 100 books, of which the bestseller is “The Miracle of Mindfulness”. Tu Hieu temple is where this great figure was first ordained at the age of 16, in 1942. In 2018, he came back to Vietnam and stayed at this pagoda. He spent his last days and passed away here on January 22, 2022, at the age of 96.

In conclusion, Tu Hieu Pagoda is surrounding by beautiful natural landscapes. Locals come to pray for success and leave behind the worries of the life. Visitors come to experience the blend of incredible architecture and peaceful pine green forest surrounding the area. This place has become one of the famous landscapes of the ancient capital and today it is also a destination that attracts many tourist come to visit. Wishing people have a wonderful time in Hue.

If you would like to visit Tu Hieu pagoda authentically, you can join our Hue City Tour By Scooter. or book a customized tour at VM Travel. 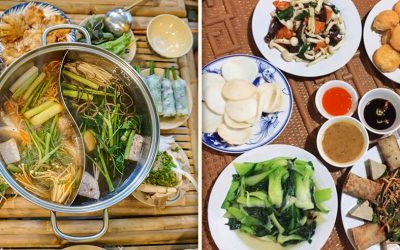 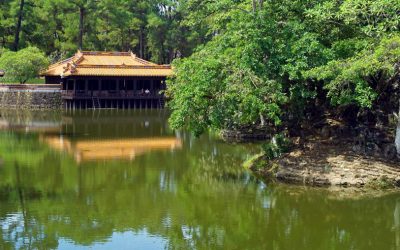